Speaker Details of Dr. Jeffrey Hunter for the event ALAPS 2020 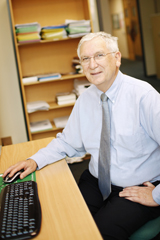