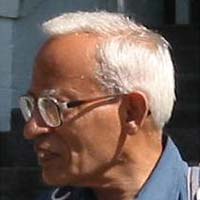 Achievements: Kalyanapuram Rangachari Parthasarathy was born in 1936 at Chennai. He studied at the Vivekananda College, Chennai, where he completed the B.A. (Honours) course in Mathematics, and moved to the Indian Statistical Institute, Kolkata, where he completed his Ph.D., under the supervision of C.R. Rao, in 1962. He has worked in Moscow as a guest of A.N. Kolmogorov. He spent many years in the United Kingdom, first in Manchester, and later at Nottingham, where he collaborated with R. Hudson on their seminal work in quantum stochastic analysis. After returning to India, he spent several years at the Indian Statistical Institute at New Delhi. Professor Parthasarathy is one of the most distinguished mathematicians that India has produced in the twentieth century.
In the theory of probability, Markov processes and the associated stochastic analysis, created by K. Ito, D. Stroock, and S.R.S. Varadhan, occupy a central place. K.R. Parthasarathy and Hudson carried out a far-reaching generalization of this theory to the non-commutative quantum world, in a series of fundamental papers. It is very likely that this theory will play a key role in future developments of non-commutative
geometry and mathematical physics. Professor Parthasarthy’s work is characterized by a directness of approach, simplicity
and penetrating power. Especially to be singled out are his papers on representations of Lie groups and gauge groups, and his papers on quantum stochastic processes. During his long and distinguished career of over a fifty years, he has fulfilled, in an exemplary manner, diverse roles: independent thinker and researcher, inspiring teacher, guide and role model to younger scientists. He has been the recipient of the Shanti Swarup Bhatnagar Prize and is a Fellow of the Indian Academy of Sciences, the Indian National Science Academy and the National Academy of Sciences, India. He has been closely associated with the Chennai Mathematical Institute from its inception and has delivered several lecture courses in its undergraduate programme.